Having practiced CPR and attending many first aid courses that my dad has run I was amazed that when I needed to perform CPR for real how my reflexes took over and I automatically got on with the job in hand.

I was at college when the caretaker collapsed. People stood around looking but not doing anything. When I approached the man a member of staff was shaking him trying to get him to respond. I immediately tilted the casualties head to open his airway, I then listened for breathing whilst counting to 10. This seemed an eternity but I was sure that the man was not breathing. I asked the member of staff to call for an ambulance and say that this was a cardiac arrest.

I started CPR. This felt similar to what I had practiced on the courses but there was a little bit more resistance on the chest than on the Brad manikin. I actually felt the chest give on a couple of occasions as ribs gave way.

Giving breaths was as practiced in the classes and I used a face shield which I keep in a pouch on my keys. I continued with CPR for about 3 minutes and then an ambulance arrived. I continued with the CPR whilst I spoke to the paramedics and explained what had happened. It was only at this time that I realised how out of breath I was. It was a real relief to see the paramedics although I had heard the sirens of the ambulance as they came along the driveway.

The paramedics told me to keep doing chest compressions whilst they set up their equipment and inserted an airway. One paramedic stuck defib pads to the mans chest, I was told to move away from the casualty and they delivered a shock. The casualty lifted off the floor when he received the shock. Just as this was happening a second ambulance arrived.

It appeared that the shock from the defib had worked as the paramedics could see a heart beat on their monitor and the man was trying to breath himself. All 4 paramedics got the casualty onto a stretcher and set off for hospital on blue lights and sirens.

I have since met the man involved in this incident at a college open evening and will be starting this college in September.

I was really surprised how the training I had just took over but I must admitted I was in shock afterwards and felt sick. I would get involved in a medical emergency again and this has given me confidence to want to become a first aid instructor and follow my dream of becoming a paramedic.

Fabrice Muamba has helped to deliver our 100,000-strong ELS petition to Downing Street…

An ICD (or implantable cardioverter defibrillator) is a small device which can be used to treat people with dangerously abnormal heart rhythms.

Abnormal heart rhythms (or arrhythmias) can cause your heart to beat too quickly, too slowly or in an irregular pattern. These heart rhythms can happen suddenly and unexpectedly and sometimes people die as a result.

The ICD is inserted just under your collar bone. It looks similar to a pacemaker and is a little bigger than a matchbox. It is made up of:

An ICD can give your heart electric pulses or shocks to get your heart rhythm back to normal.

How does an ICD work?

Your ICD constantly monitors your heart rhythm through the electrodes and if it notices a dangerous heart rhythm it can deliver three treatments:

Who needs an ICD?

ICDs are used for some of the people who:

How is an ICD fitted?

ICDs are inserted under local anaesthetic, but with sedation, so you will feel very sleepy. It can take as little as one hour to insert the ICD, although the time it takes will depend on the type of device you’re having. You will usually stay overnight in hospital and your ICD will be checked thoroughly before you leave.

Who can I talk to?

It’s natural to feel worried about having an ICD fitted, but it often helps to talk about your feelings with someone close to you or with a healthcare professional.
See on www.bhf.org.uk 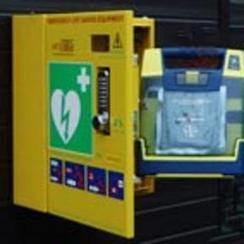 FIVE East Lancashire supermarkets are among the first in the country to put life-saving defibrillators in place.

On the morning of July 10, attorney Jerald Gale was reading an e-mail in his office on the 20th floor of a Koreatown high-rise. That’s the last thing the 58-year-old husband, father and avid cyclist remembers before losing consciousness. 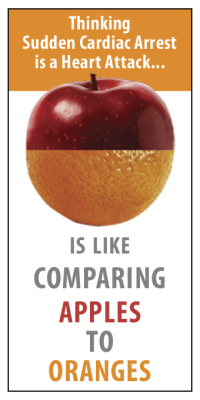 Anatomy of a Heart Attack

In contrast to a heart attack, sudden cardiac arrest is caused by an “electrical problem” in the heart. It occurs when the heart’s lower chambers (ventricles) suddenly develop a rapid, irregular rhythm (ventricular fibrillation) causing the ventricles to quiver rather than contract. The chaotic quivering motion of the ventricles renders the heart an ineffective pump that can no longer supply the body and brain with oxygen.

Within seconds, the person loses consciousness and has no pulse. Only immediate emergency treatment, such as cardiopulmonary resuscitation (CPR) and external defibrillation, can prevent death from sudden cardiac arrest. Time is key to surviving sudden cardiac arrest, with chances of survival decreasing about 10 percent every minute without defibrillation. The American Heart Association recommends defibrillation within five minutes of collapse or sooner.
See on heartfeltcardiacprojects.wordpress.com 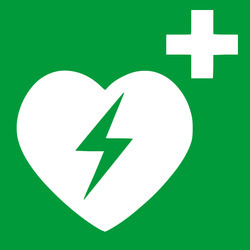 One of the important aspects of advanced life support is minimisation of the interruptions to CPR.
Hands on defibrillation has been suggested as being a safe means of achieving this, however Sullivan (2012) suggests that this may not be as safe as expected.
4 different types of gloves were tested (chloroprene, latex, nitrile and vinyl) with 2 current levels being passed through them (0.1 mA and 10 mA). 45% of single gloves and 77% of double gloves allowed current flow of 0.1 mA within the normal defibrillation voltage range. 7.5% of single gloves and 6.2% of double gloves allowed current flow over 10 mA.
A significant proportion of all gloves tested showed current flow across them, and even if no sensation was felt, it does not guarentee a safety margin.
Take home message – Hands on defibrillation is not entirely safe, so it’s back to minimisation rather than elimination of the pause for defibrillation. 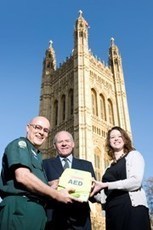 Visitors and employees at the Houses of Parliament can now be assured of receiving the very best in service from the first aid team, following the installation of 16 new defibrillators.

Part funded by the British Heart Foundation, defibrillators are machines that can deliver a shock to restart a patient’s heart should they suffer a cardiac arrest – when the heart stops pumping blood around the body.

The newly qualified six-strong HeartStart training team and the current first aid team at the Houses of Parliament will now be on hand to deliver this lifesaving care 24 hours a day.

London Ambulance Service is responsible for over 800 public-access defibrillators around the capital, placed in tourist attractions, transport hubs, shopping centres and sports facilities.

Last year the scheme helped to save 11 patients who had suffered a cardiac arrest to be discharged from hospital. Overall in London, almost a third of patients suffering cardiac arrest survived in 2011/12 – the highest in the country.

The BLS/AED Subcommittee has received a number of enquiries from people who have been informed about “cough CPR” and “How to survive a heart attack when alone”. Advice has been put on the Internet that someone who thinks he or she is suffering a heart attack should repeatedly cough and go at once to a hospital, by car if necessary.

This advice is based (very loosely) on published case reports of people being able to maintain some sort of cardiac output during cardiac arrest by vigorous coughing – so-called “cough CPR”. The scenario has usually been of a patient developing ventricular fibrillation whilst being monitored, often whilst undergoing cardiac catheterisation. The patient has been encouraged to cough and a measurable circulation has been recorded. This anecdotal evidence supports the theory that chest compressions during CPR are successful because they increase intrathoracic pressure and result in a flow of blood. The collapsed veins and patent arteries at the thoracic inlet result in this flow being in a forward direction. Coughing produces the same effect.

The BLS/AED Subcommittee knows of no evidence that, even if a lone patient knew that cardiac arrest had occurred, he or she would be able to maintain sufficient circulation to allow activity, let alone driving to the hospital.

A Stone man has now spoken of the night he nearly died at his local gym.

Russell Follows said if it hadn’t been for a quick thinking fitness instructor he wouldn’t be alive today.

Mr Follows suffered a cardiac arrest in the changing rooms of the borough council run Westbridge Park Fitness Centre. But local instructor, Lee Nicklin used CPR and an on-site defibrillator to keep the man alive until an ambulance took him to University of North Staffs hospital.

Speaking about the incident Mr Follows, 55, said: “Thanks to Lee I’m still here and in the world.”

Stafford Borough Council provides defibrillators at a number of its premises including all leisure centres, the Civic Centre, Gatehouse Theatre and the crematorium on Tixall Road with around 70 members of staff trained to use them.

Mr Follows continued: “I’m coming to terms with what’s happened. I can’t remember anything from that night, not even driving to the gym, or using the gym.”

“He acted immediately and did enough that evening to save my life and I can only say a million thank yous. And even that’s not enough. He is a genuinely nice guy, and got very emotional when I went in and thanked him last week.”

Mr Follows said how defibrillators are a much needed piece of equipment: “I’m just grateful that as well as Lee there was a defibrillator on hand which is there for everyone to use in emergencies – and as you can see they save lives.”

But the incident has not put him off using the gym: “I enjoy the gym so it’s hard not to go, but I’ve been told to take it easy. So I’m not going to over do it just yet.”

Mr Follows left hospital on Saturday 2 March after under going surgery where he was fitted with a mini defibrillator, following the cardiac arrest last month: “Having the defibrillator fitted was a big decision to make, but really it’s a no brainer it’s like a comfort blanket in case anything happens again. Plus it’s also peace of mind for my family.”

Lee, 39 said: “It was all part of the job. We are trained to use the defibrillators and knowing that it saved Russell’s life demonstrates how important the machine and our regular training is.”

He continued: “It was just so emotional and great to see Russell when he came back into the gym with a thank you card.”

Councillor Mike Smith, cabinet member for leisure, said: “We had a similar incident happen in Stafford several years ago, and it just highlights how important defibrillators are.”
See on www.staffordbc.gov.uk